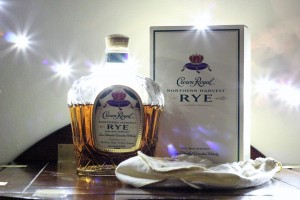 Yes, it’s *that* whisky! “Greatest whisky in the wold” some people have quoted, incorrectly. “Voted best!” others have also misspoken. Basically, what you’ve heard about this bottle of whisky is probably overblown.

Jim Murray is a pretty famous whisky guy. He publishes the Whisky Bible, a book which is popular among people who like rankings and whisky. His opinion carries heft; last year he named a Japanese whisky as the best and Japanese whisky had a fantastic year in sales. This year he has tapped the crown jewel of Gimli, Manitoba as this year’s best whisky, and it’s had the same effect – Crown Royal has been unable to keep up with demand. Which for followers and fans of Canadian whisky is both great news and a little mystifying.

We weren’t too impressed when we had Crown Royal De Luxe, aka the purple bag of angry in the back of everyone’s liquor cabinet. But the Northern Harvest was a definite improvement over its less-acclaimed stablemate, here’s what we thought: